Back to the Bosch


So, once again, the Rickson Gracie Holland guys re-affirmed their relationship with and commitment to, Rickson with another visit from the Master.
With good connections now in Holland, and an established base in ‘S-Hertogenbosch, cheap ferry fares and good hotel prices, I planned my second trip of the year.  With it being half-term, I was also able to take along my wife and kids and was also joined by Simon, Mike (Carlsons) and my old friend Jim (who has been training for about 6 months now at Carlson’s in Essex and is now thoroughly hooked on BJJ).


After a pleasant ferry crossing (apart from losing my Rickson cap to the wind whilst on deck – much to my children’s delight!) we drove across Belgium and Holland.  Last time, this drive took only a few hours, but this time took around six due mainly to being stuck in horrendous traffic around Antwerp – note to self and all…do not drive near Antwerp on a Friday afternoon!
After arriving at our hotel in Rosmalen, Simon and I headed straight back out to meet up with Michel at his gym for a private lesson.


During the preceding week, Rickson had been staying in Holland running sessions for the Instructors that make up the Rickson Gracie Holland team.  Michel was keen to show us some stuff on passing butterfly guard, beginning with a very neat technique but then expanding into the various principles around the technique and also then into the principles of attack from the bottom.
The session was gold.  I’ve done a lot of coaching as part of my work and I’m a RFU qualified coach, so I like to think I know what I’m talking about when it comes to coaching and this session was one of the most effective coaching sessions on Jiu Jitsu that I’ve ever had.  For both Simon and I, the progression that we made in that session from start to finish was exponential.  A really great session and on a very useful subject.


The next day started with a relaxed trip into Den Bosch for breakfast, leaving my wife and kids as we headed off for Roermond – the location for the first of our two sessions with Rickson.
On arrival, it was great again to see so many of the people I’d met on my last trip and also properly catch up with a couple of people I missed – Raoul (Black Belt that runs the school in Amsterdam) and Russ (ex-pat purple belt that runs the school in Leiden).  There were also a few familiar faces from the UK around.  After doing the rounds, grabbing a bit of loot (including replacing the cap that I’d lost at sea), Rickson called order and began the now familiar formalities of introducing the seminar.


As before, I’m not going to go into detail with what Rickson taught, but will list what we covered, so that the curious can at least understand the span of what Rickson teaches.
Day 1 - content overview
I was pleased that during some of the drilling, Rickson recognised me and came up and said hi and at another point came and sat with us, remembering us from his time in the UK.  To be honest, given the number of people he must meet around the world each year, I had no expectation that he would remember us, so was really pleased when he did.
After a much later start on Sunday, we headed off straight from the hotel for Roermond, this time with my wife and kids on board.  Ever since they can remember, Rickson is a name they’ve known through me and now that they too train Jiu Jitsu, Rickson is a legendary figure in their lives as well.  I’d already cleared with Michel for my kids to tag along and meet Rickson after the seminar, so, Gi’s at the ready, they watched the seminar from the bleachers waiting for their chance.


Day 2 followed a similar format to day one, covering:
At the end of the session, Rickson spoke at length at his belief in the fundamentals of Jiu Jitsu as he understands it, his perception that Jiu Jitsu is facing a split with the more sport oriented branch and spoke with disdain at techniques that live only in competition, describing them as “shit”.  He spoke with pride at Kron’s recent clean sweep at the ADCC in china with 4 submission wins, clearly feeling that this demonstrated his case perfectly. 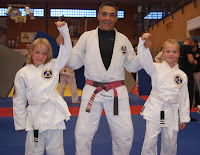 After the seminar, Michel was great at ensuring that my kids got to meet Rickson and get their belts signed – a really proud moment for me, and one, should they continue their journey, that will form part of a memory that many adults, let alone kids will not have the opportunity of.

Michel also spent some time with them both teaching the elbow escape, rolling with them and watching them roll together – something I’m really grateful for as it cements their learning and enthusiasm – hopefully a real investment in the next generation.


The seminar was very similar in content to the others I’ve attended, but this was of no detriment – it reminded me of key details and I also understood better this time round, whereas it all seemed too much to remember the first time.
Rickson was in great form – very relaxed and did an amazing job of spreading his time and attention amongst the attendees.   I also really enjoyed Jim being there too – because he’s my mate, but also as I know that as a martial artist, he views Rickson as the legend that he undoubtedly is, so it was really great to experience someone else’s excitement at meeting Rickson and experiencing his teaching.


During the 2nd session, Rickson talked about how he felt that Jiu Jitsu was great training for life as it conditions you to find comfort in uncomfortable situations.  This philosophy was put to the test as we left Roermond with the wind and rain beating down and news of the predicted storms hitting the UK coming through.  The news of Dover port being shut on Monday morning didn’t look promising, but we made our way at a sedate pace towards Dunkirk anyway with the storms seemingly crossing over us as we headed through Belgium.  We arrived at a windy but sunny Dunkirk, expecting huge delays, but to our surprise, the port was almost empty and we sailed 30 minutes earlier than scheduled.
The crossing was pretty uncomfortable but we got home safe and sound and earlier than anticipated.


I like to think, touched by the hand of Rickson, we attained maximum efficiency from minimum effort and stayed comfortable in what could have been a very uncomfortable situation.  Or maybe we were just lucky – whatever the case, long may it continue!
Posted by Al at 14:34